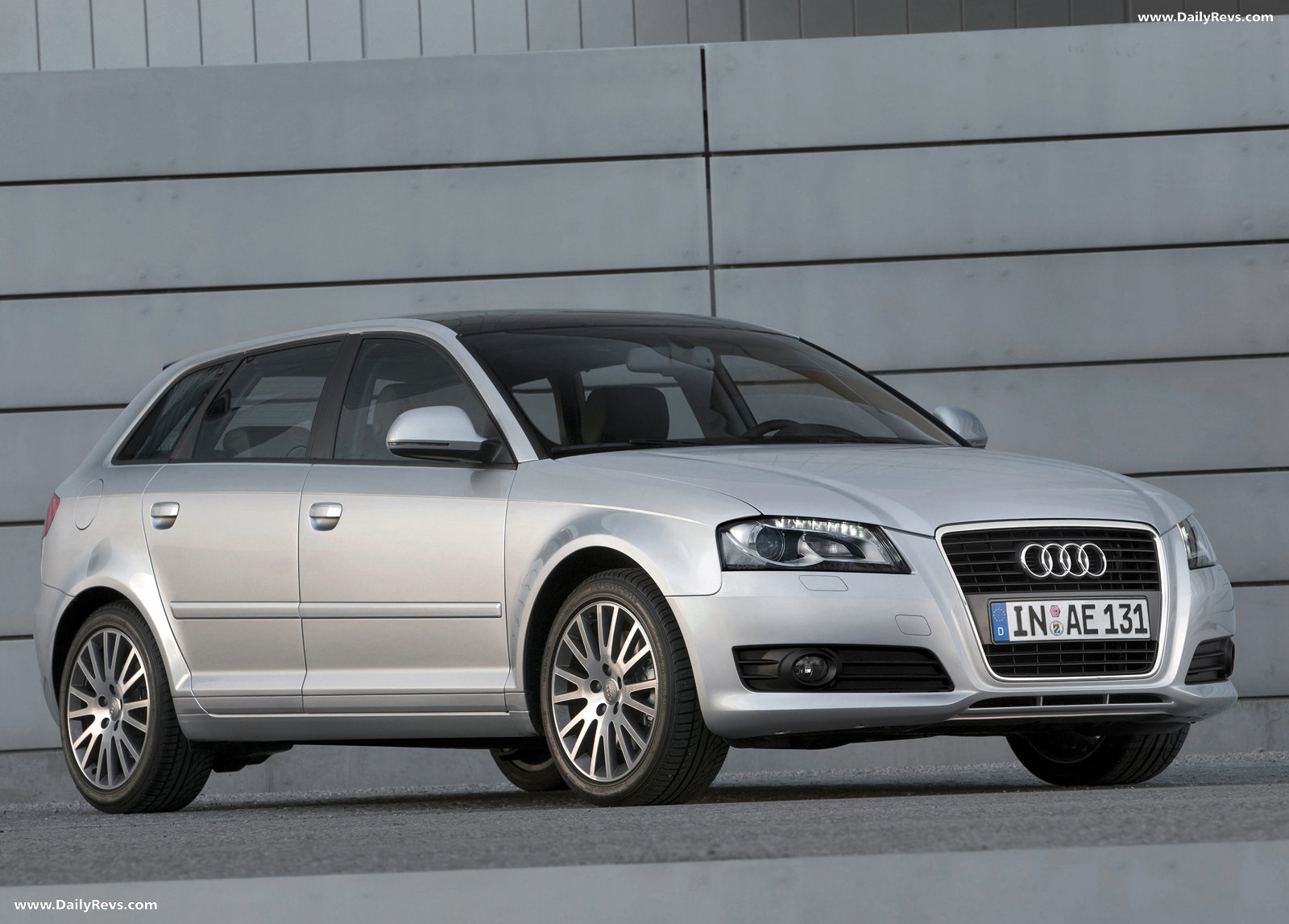 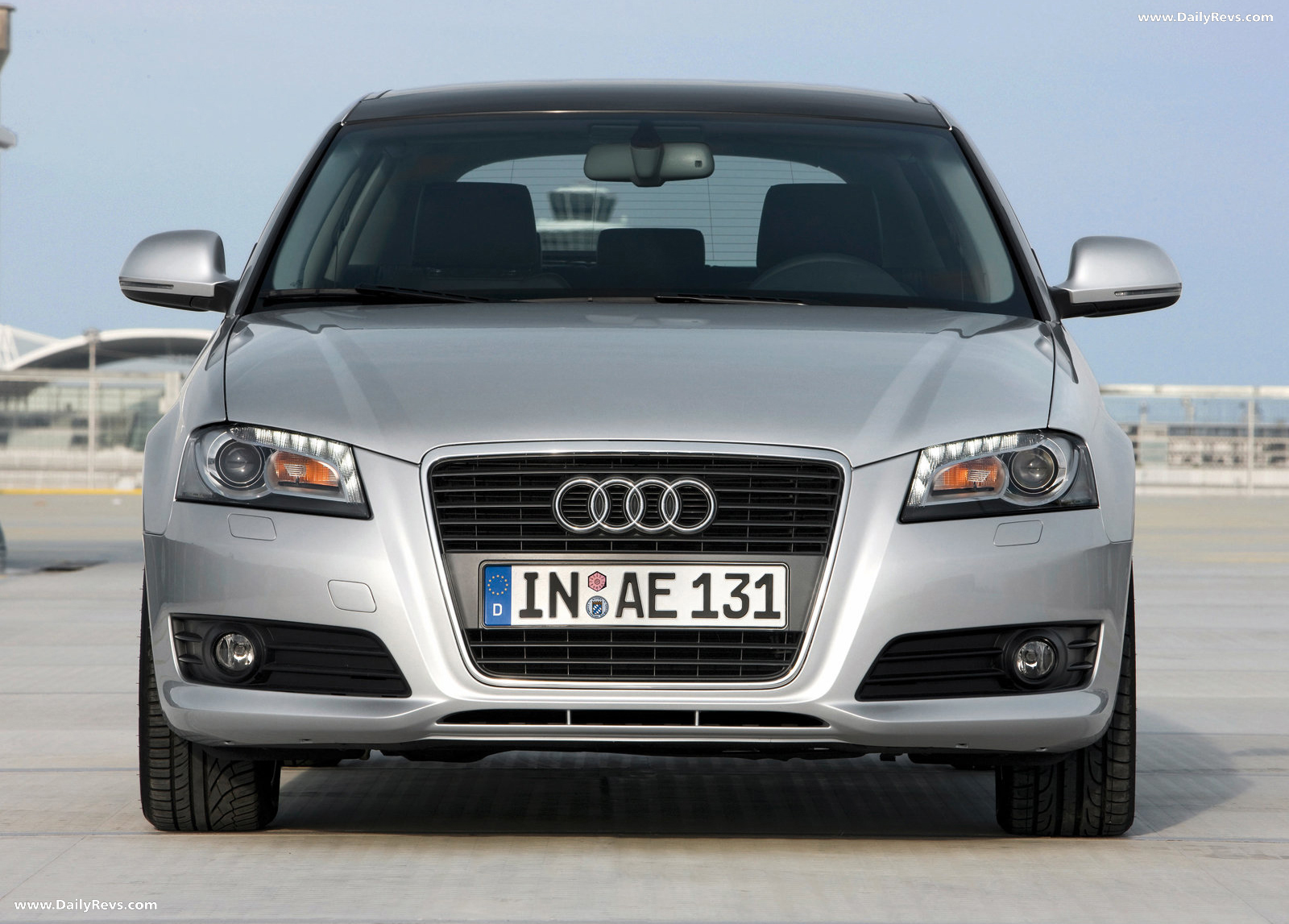 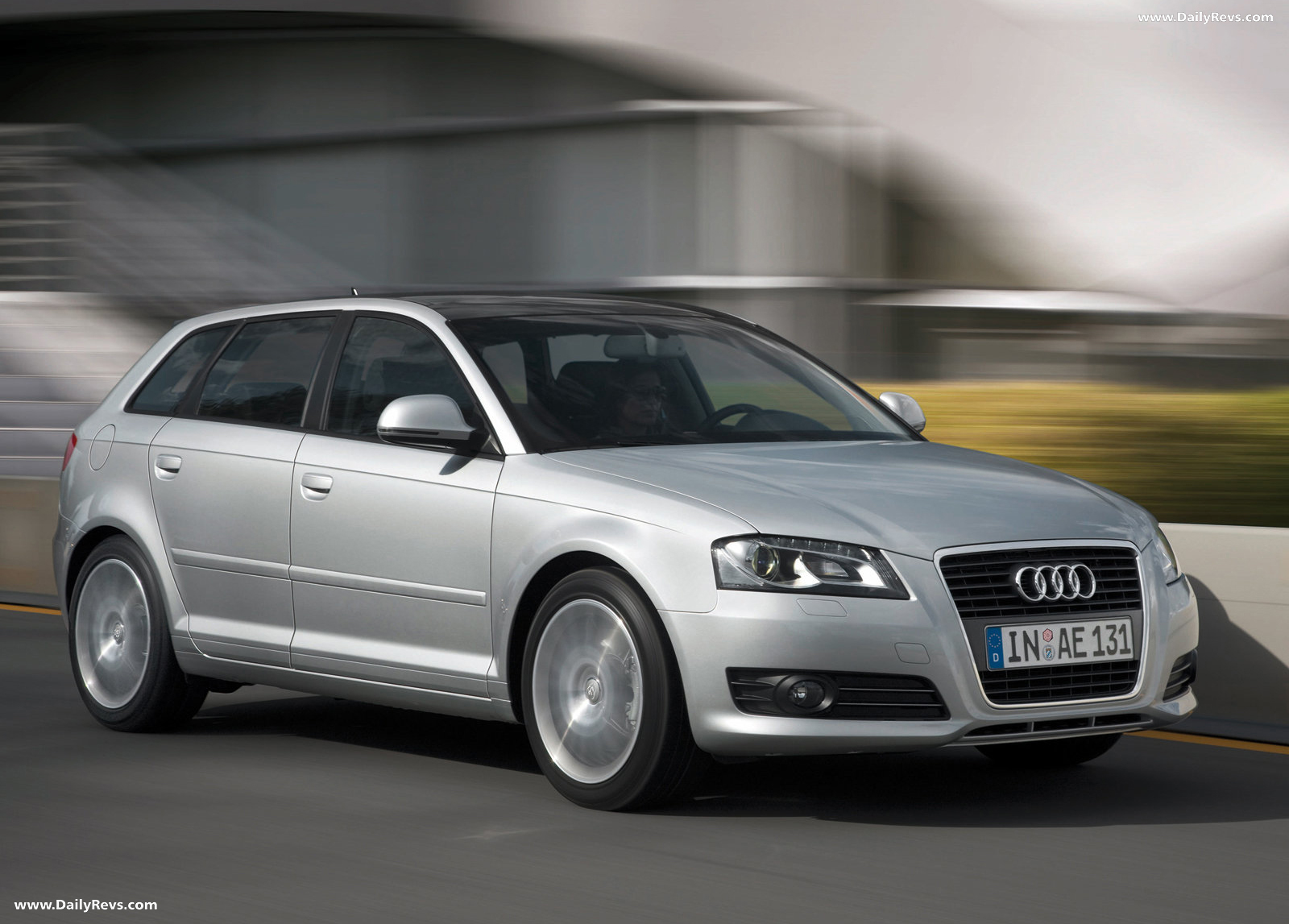 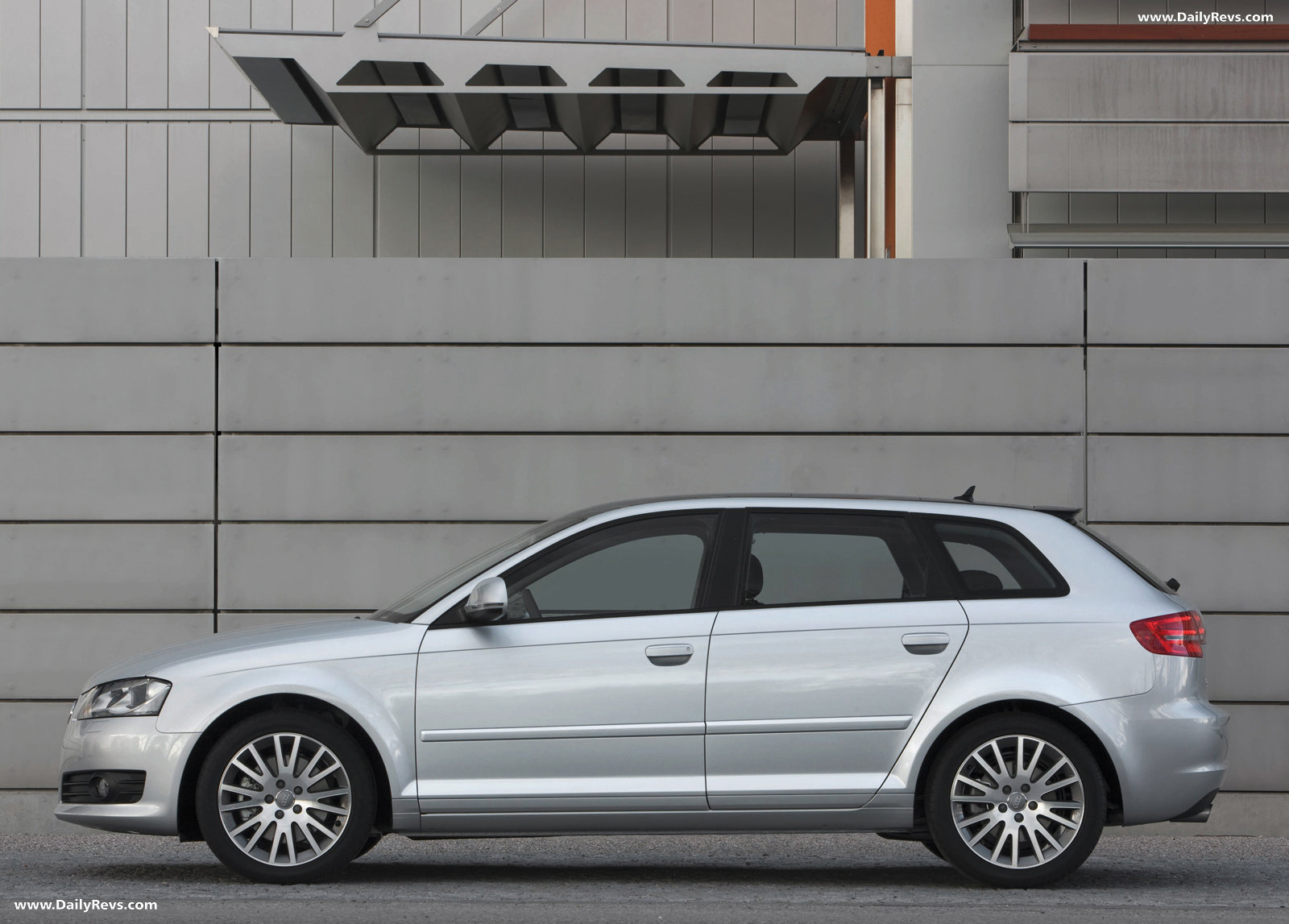 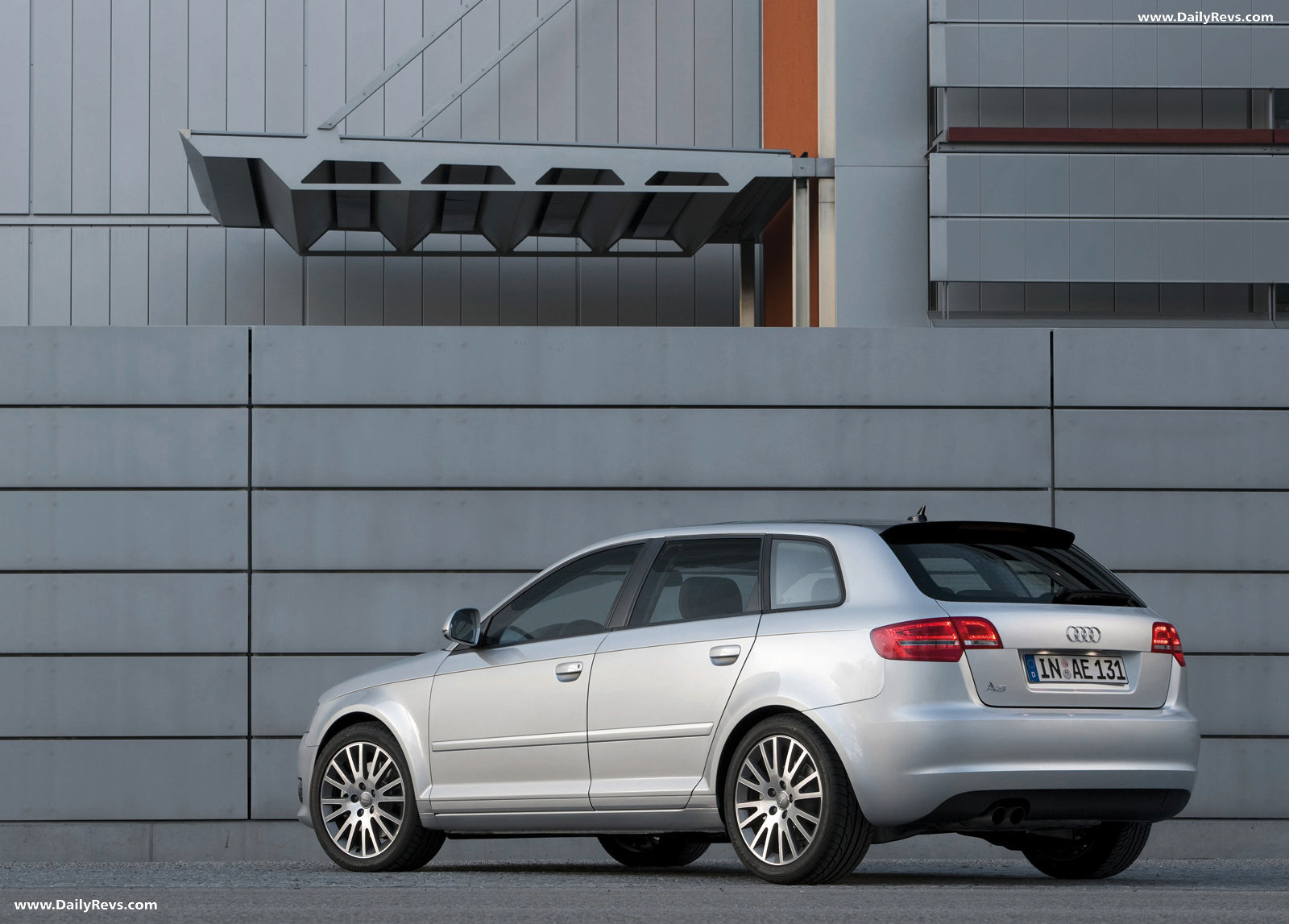 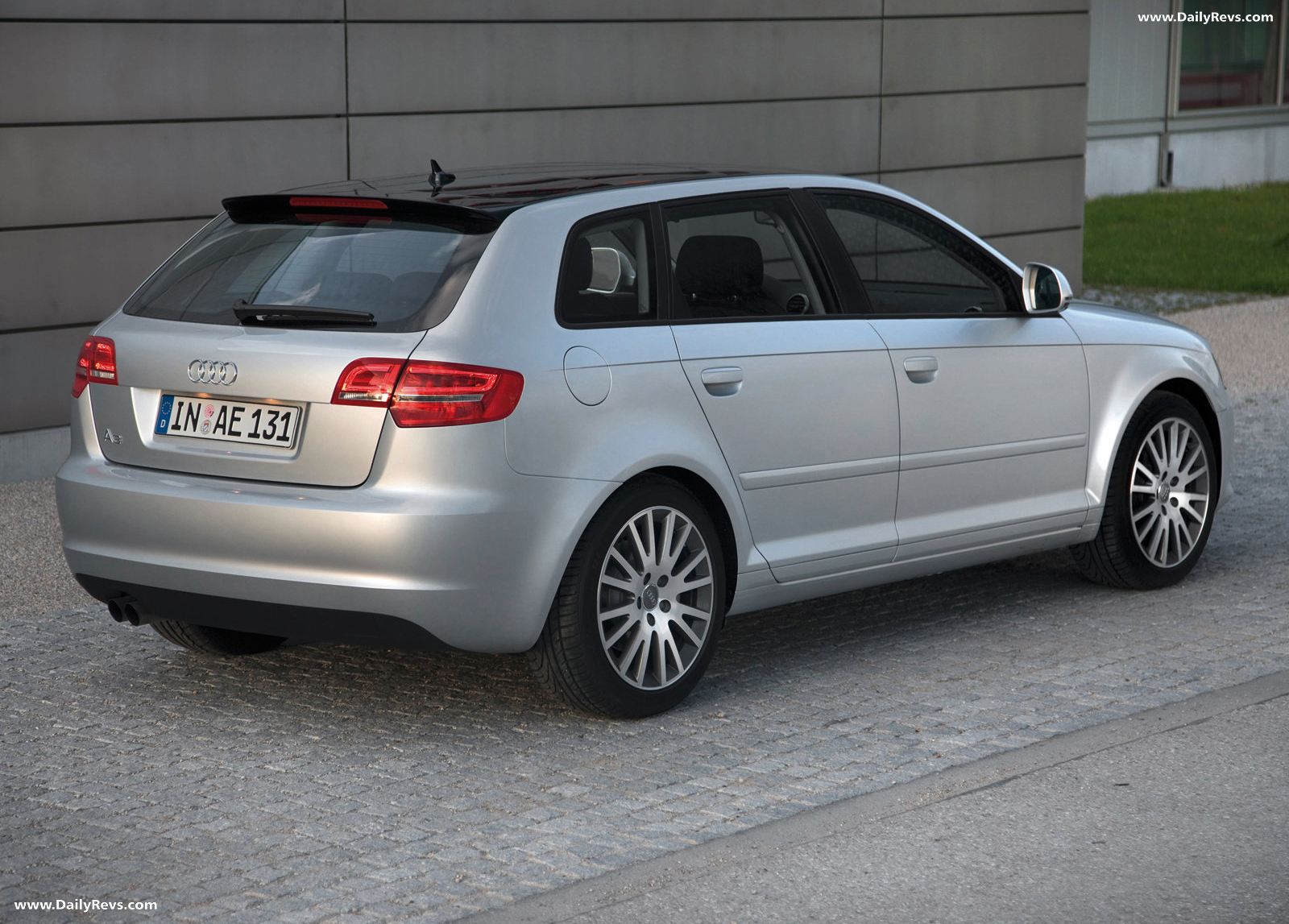 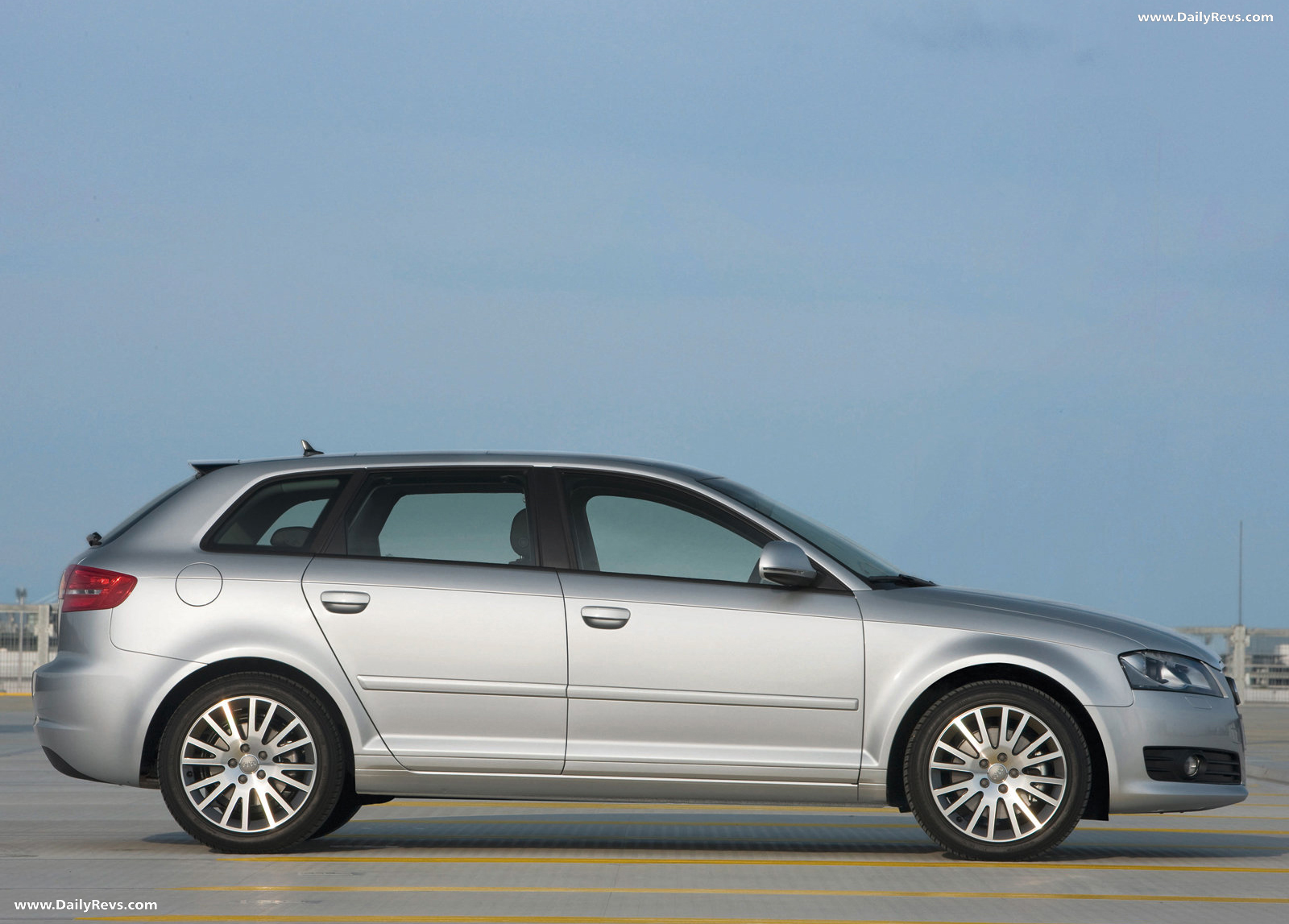 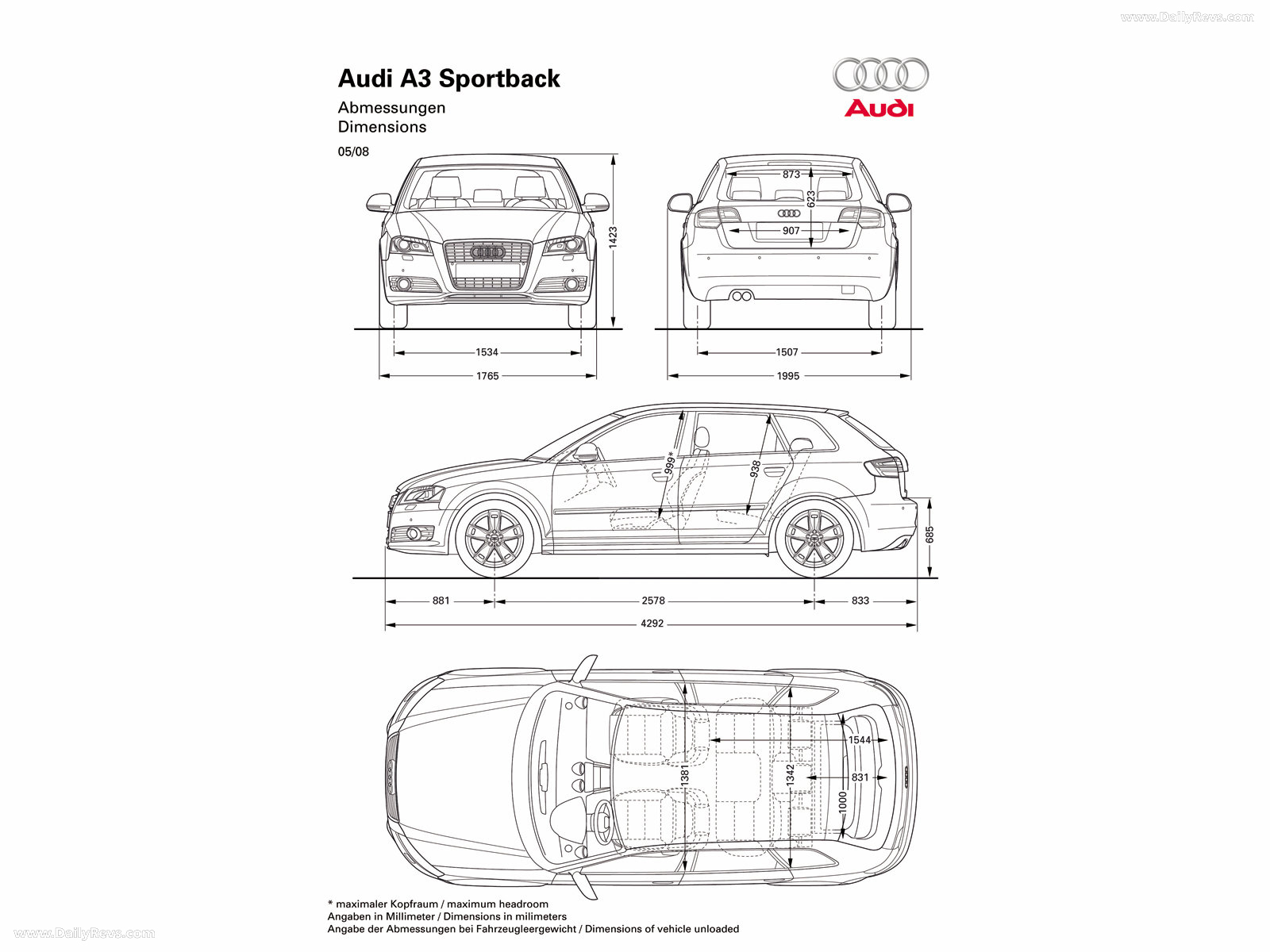 Audi is further expanding the sporty profile of the A3 and the Audi A3 Sportback. High-tech components, such as the seven-speed S tronic dual-clutch transmission and the shock absorber control system Audi magnetic ride, further enhance driving pleasure. The S3 Sportback, developing 195 kW (265 hp), rounds off the range as the new top model. With its expressively revised design, this premium compact vehicle appears even more elegant. Delivery is scheduled to start in the summer. Despite improved equipment, Audi will only be adjusting the prices marginally.

The Audi A3 is a successful model – and has been for over a decade. The first generation made its debut in 1996; it immediately opened up its own market segment, that of premium, compact vehicles for individual, demanding customers. In 2003, Audi launched the second generation of the three-door A3; one year later, this was followed by the five-door Sportback. Over the years, the model series has enjoyed outstanding success – 230,849 vehicles were manufactured in 2007 alone, the fourth record year in a row. At the end of 2008, the one millionth secondgeneration A3 came off the assembly line. Audi is now continuing to extend its position. 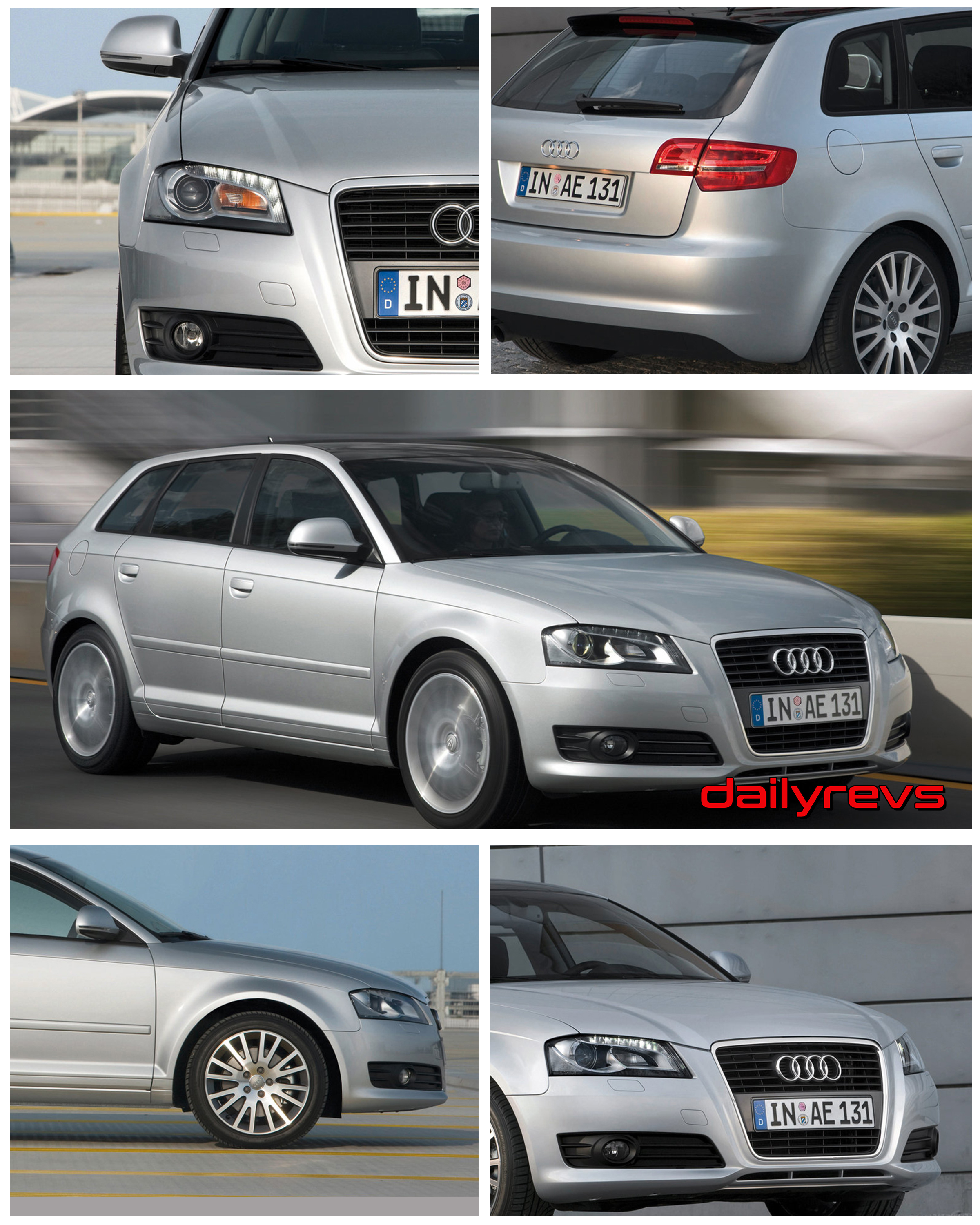 The A3 and Audi A3 Sportback bodies clearly reveal the many details of the streamlined, sporty profile. The engine hood and the fenders are more expressive, whilst the bumpers and the single-frame radiator grille have been finely upgraded. An elegant trim – the “wing” – underlines the high technical perfection of the new headlamps. Daytime running lights are standard; if optional bi-xenon headlamps are fitted, this is implemented by means of seven LEDs. On the flanks, exterior mirrors with integrated turn signal lamps, modified door handles and powerful wheels emphasize the main features. The wheels fitted in the sporty Ambition equipment line have a diameter of 17 inches and are manufactured from cast aluminum.

Modifications to the bumper and the lamps lend the rear end an even more striking look. In the Audi A3 Sportback, innovative light guide rods form a flat corona, which generates an unusual optical effect in the dark. In the three-door A3, the trunk lid has been provided with a new light edge. The design modifications have extended the A3 by 25 millimeters (0.98 inches) to a length of 4.24 meters (13.91 feet), whilst the Audi A3 Sportback (4.29 meters (14.07 feet)) has grown by six millimeters (0.24 inches) – its sporty proportions therefore remain virtually unchanged. Four new colors supplement the color charts.

The interior welcomes passengers with an atmosphere of sporty elegance and top quality. The air vents, the light switch and the center console have been refined with discreet chrome strips; the switches and controls beneath the audio system have been redesigned. The instruments display black dial faces and red pointers. A gear change display in the driver information system helps to achieve an efficient driving style. A driver information display with high-resolution, white lettering is fitted in the Ambiente and Ambition equipment lines. The spectrum of seat coverings rages up to Fine Nappa leather for the sports seats. New, standard trim variants in pearlescent, micrometallic and Vavona wood are available, whilst Aluminum Medial and burr walnut inlays are available as options.

With a volume of 350 to 1080 liters (12.36 to 38.14 cubic feet), the Audi A3 offers the largest luggage compartment in its class, with the Audi A3 Sportback offering 370 to 1100 liters (13.07 to 38.85 cubic feet). These values are a few liters lower in the models with quattro drive due to the special rear axle. A particularly practical feature is available in the front-wheel-drive versions – a reversible load floor, which can be used as a drip tray for damp objects. Roof railings and a panoramic sliding roof are also available for the versatile Audi A3 Sportback.

As before, Audi will be equipping the A3 and the Audi A3 Sportback with eight engines. Six of these are four-cylinder direct injection engines with turbocharging. Their abbreviations, TFSI and TDI, symbolize the combined strengths of Audi engine technology – they stand for performance and tractive power, for dynamics, smooth running characteristics and efficiency.

All engines combine a powerful character with high efficiency. The 77 kW (105 hp) diesel engine is also used to power the Audi A3 1.9 TDI e, which consumes just 4.5 liters of diesel per 100 kilometers (52.27 mpg) thanks to its special fine-tuning. The 1.8 TFSI and 2.0 TFSI engines have been optimized in terms of friction. The majority of the engines’ fuel consumption values have been reduced significantly, by up to 15 percent.

The range of power transmissions has been recently extended. Five of the eight engines are coupled to six-speed manual transmissions as standard; the 1.6 and the 1.9 TDI engines are fitted with a five-speed transmission, whilst the 3.2 is equipped as standard with the S tronic dual-clutch transmission, which is now available as an option for all engines. This high-tech assembly shifts the gears extremely quickly and comfortably – in fully automatic or manual mode, controlled by shift paddles on the steering wheel (standard as of 103 kW/ 140 hp), according to the driver’s wishes.

In the six-cylinder version, the 2.0 TFSI and the diesel engines, the S tronic system is equipped with six gears, as before. The 1.6, the 1.4 TFSI and the 1.8 TFSI engines operate with a newly developed seven-speed S tronic transmission. Their two clutches have no separate oil supply – another innovative solution which increases the already high efficiency still further. Six of the seven gears are short and sporty, whereas the seventh reduces the engine’s speed and consumption thanks to its long gear ratio.

Audi has also extended the quattro range – a unique feature in the premium compact class. The four-wheel-drive system is now available for five engines – the 1.8 TFSI, the 2.0 TFSI, the 3.2 (standard) and the two 2.0 TDI engines. The central, hydraulic multi-plate clutch had been intensively further developed – it now responds even faster when the engine’s power has to be redistributed between the axles. This high level of effort results in a further increase in stability, traction and driving enjoyment.

Precision and harmony: The dynamic chassis

On winding roads, the Audi A3 and the Audi A3 Sportback are able to outpace their rivals with an optional high-tech feature – the adaptive shock absorber control system, Audi magnetic ride. The driver can switch between “Normal” and “Sport” programs. A magneto-rheological fluid, which circulates in the shock absorbers, changes its flow characteristics within milliseconds when a voltage is applied; the damping system’s characteristics switch – from comfortable to sporty. The electronic control system is available from Audi for the gasoline engines as of 118 kW (160 hp) and both of the two-liter TDI engines.

A question of character: The equipment lines

The Audi A3 and the Audi A3 Sportback have also been significantly upgraded in equipment terms. Three lines are available. Attraction – with the “chorus” radio system, including four speakers – is a variant which is full of character. The dynamic Ambition line is fitted with features such as sports seats, sports suspension and 17-inch wheels, whilst the luxurious Ambiente is equipped with a light and rain sensor, a cruise control system, an interior light package and a new windshield with acoustic glazing as standard, besides other features.

The S line, which contains an exterior package and a sports package, the luxurious Audi exclusive line and the refined options from the Audi exclusive range are optionally available for pronounced individualists.

In the infotainment sector, customers can choose between cutting-edge solutions, from two navigation systems to the Bose sound system and the iPod connection (from quattro GmbH’s Audi exclusive range). Many extras document the high technological standard of the A3 model series, including the two-zone deluxe automatic air conditioning system and adaptive light, the dynamic cornering light system.

The Park Assist system is a brand-new high-tech system. At low vehicle speeds (up to 30 km/h (18.64 mph)), its ultrasonic sensors measure longitudinal parking spaces at the side of the road. If one of these is sufficiently large to reverse the vehicle in, the driver is provided with an indication in the driver information system. If he now engages reverse gear and accelerates, the system takes over the electromechanical steering and automatically steers the car into the parking space. The driver only has to operate the accelerator, the clutch and the brake. 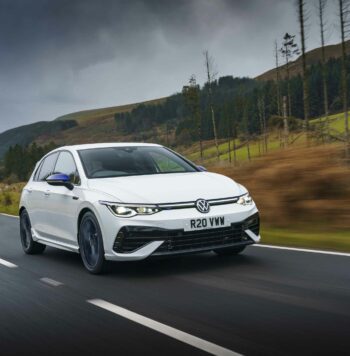 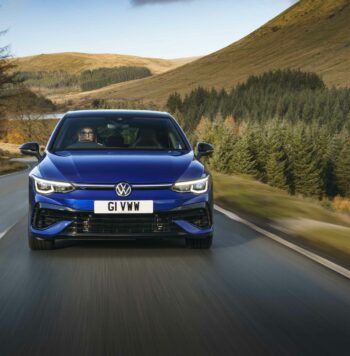 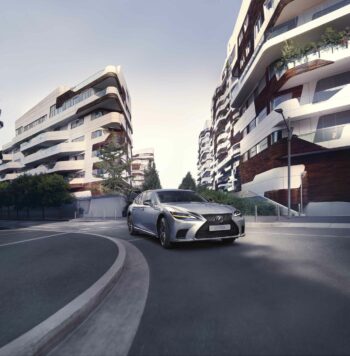