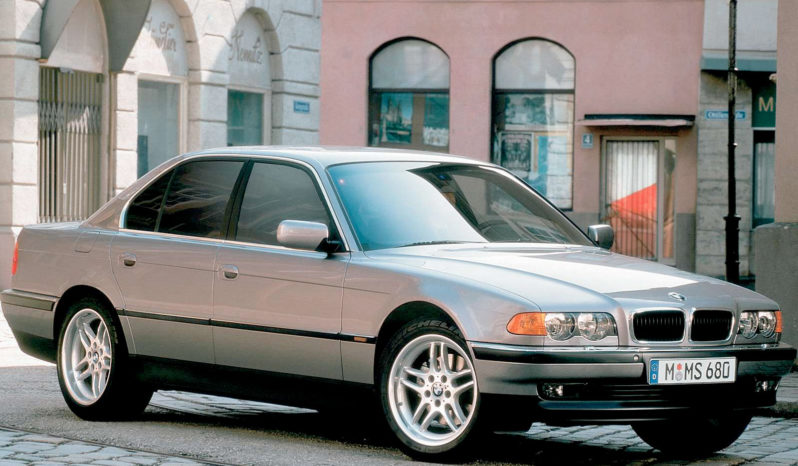 The E38 was introduced to the American market in 1995 originally with a 4.0L V8 and steel sunroof. For the 1996 model year, a new 4.4L V8 (producing 282 bhp) along with a glass sunroof replaced these features while the base 740i was not offered for the 1996 model year. In 1997, the 740i returned and in 1998, the 7-series received significant safety upgrades: side impact airbags standard up front and optional in the rear with a new, industry first, standard Head Protection System. For the 1999 model year, the 7-series was given a refreshening with new headlights, tail lights, and trunk molding. A sport package is now offered that included larger, 18″ wheels, as well as sport suspension, torque converter, and axel. In 2000, the protection models are now offered and in 2001, another minor refreshening took place with clear turn signals and painted lower body work.

You can find more visual details of the 1999 BMW 740i gallery by scrolling up.

Features of the E38 7 Series included high-pressure headlight washers, auto-leveling xenon HID headlamps, power moonroof, a six-CD changer with 14 speakers and four subwoofers, onboard navigation and rain-sensing wipers. Other features included an automatic climate control system with full left/right controls and a 3-position memory system for the driver’s seat, safety-belt height, steering wheel and outside mirrors. Front side airbags and a Head Protection System (HPS) were also standard. The car featured an all-leather interior with burl walnut trim. The continuous passive motion “Active” seat technology was introduced in 1998 to improve comfort for the driver and front passenger.

You can find more visual details of the 1999 BMW 740i gallery by scrolling up.